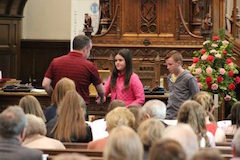 On Sunday Bill Hogg collected a donation from the Abbey Youth Group on behalf of the Russell Hogg Trust. The Jars of Compassion, together with a money raised at the Queen’s Birthday Patrons’ Lunch, raised the very impressive sum of £675. The money will be used to support badminton and for disability sport.

Russell Hogg was born, grew up and lived in Dunfermline. He was Scotland’s 3rd most capped International Badminton Player with 117 International Caps and represented his Country at every level and was reserve for the 1992 Barcelona Olympics. Russell passed away in 2012, at the age of 44 years.
His two passions in life were to play badminton and, in his later years, a true desire to promote disability sport.

The Russell Hogg Trust was set up according to Russell’s wishes, to support both young aspiring badminton players from the age of 6 years to 16 years and disabled athletes of all ages. The Trust will give priority attention to disadvantaged athletes by supporting them to achieve their personal goals and ambitions and to achieve at the highest possible level.