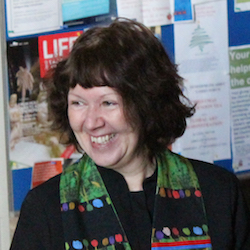 1Though I speak with the tongues of men and of angels, and have not charity, I am become as sounding brass, or a tinkling cymbal. 2And though I have the gift of prophecy, and understand all mysteries, and all knowledge; and though I have all faith, so that I could remove mountains, and have not charity, I am nothing. 3And though I bestow all my goods to feed the poor, and though I give my body to be burned, and have not charity, it profiteth me nothing. 4Charity suffereth long, and is kind; charity envieth not; charity vaunteth not itself, is not puffed up, 5Doth not behave itself unseemly, seeketh not her own, is not easily provoked, thinketh no evil; 6Rejoiceth not in iniquity, but rejoiceth in the truth; 7Beareth all things, believeth all things, hopeth all things, endureth all things. 8Charity never faileth: but whether there be prophecies, they shall fail; whether there be tongues, they shall cease; whether there be knowledge, it shall vanish away. 9For we know in part, and we prophesy in part. 10But when that which is perfect is come, then that which is in part shall be done away. 11When I was a child, I spake as a child, I understood as a child, I thought as a child: but when I became a man, I put away childish things. 12For now we see through a glass, darkly; but then face to face: now I know in part; but then shall I know even as also I am known. 13And now abideth faith, hope, charity, these three; but the greatest of these is charity. (KJV)

21And he began to say unto them, This day is this scripture fulfilled in your ears. 22And all bare him witness, and wondered at the gracious words which proceeded out of his mouth. And they said, Is not this Joseph's son? 23And he said unto them, Ye will surely say unto me this proverb, Physician, heal thyself: whatsoever we have heard done in Capernaum, do also here in thy country. 24And he said, Verily I say unto you, No prophet is accepted in his own country. 25But I tell you of a truth, many widows were in Israel in the days of Elias, when the heaven was shut up three years and six months, when great famine was throughout all the land; 26But unto none of them was Elias sent, save unto Sarepta, a city of Sidon, unto a woman that was a widow. 27And many lepers were in Israel in the time of Eliseus the prophet; and none of them was cleansed, saving Naaman the Syrian. 28And all they in the synagogue, when they heard these things, were filled with wrath, 29And rose up, and thrust him out of the city, and led him unto the brow of the hill whereon their city was built, that they might cast him down headlong. 30But he passing through the midst of them went his way, (KJV)