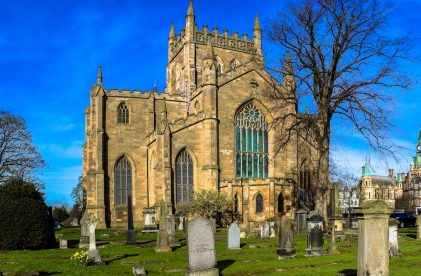 The New Abbey Church of Dunfermline  was built to the design of William Burn of Edinburgh and was dedicated in 1821. When in 1818 foundation work for the building was in progress, the tomb of King Robert the Bruce (who had been buried in the choir of the Old Abbey in 1329) was rediscovered the remains were carefully reinterred within the new Church. At this stage the design of the tower over the crossing of Nave and Transepts was completely revised by William Burn to incorporate the words “KING ROBERT THE BRUCE” around the top parapet. The tomb is marked by a full size brass gifted by the Earl of Elgin in 1889. Although the Church had an organ from the beginning it was not until 1882 that a “proper” organ was first installed and as a result of frequent rebuilding and tonal improvement it is now one of the finest instruments in the country.

The Abbey church is in the Gothic Revival style and  is cruciform in plan having a Nave, Transepts and a Chancel. The Nave and Chancel lie on an East/West axis of the former Abbey Church. On the North and South sides of the Nave are side aisles each with a gallery over which are linked by a gallery across the West end of the Nave.

On the North side of the Chancel area a chamber has been formed for the Organ Pipes and in the same space on the South side a memorial chapel formed. The Abbey Church is a category “A” listed building and is constructed in mass ashlar sandstone walling which is carried up to crenelated parapets above Nave, Side Aisles and transepts. Windows are in the form of pointed arches infilled with stone tracery into which is set leaded windows of stained glass or small diamond panes. The roofs over Nave, Chancel, Transepts and Aisles are slated pitched roofs with lead flashings, ridges and parapet gutters. Corner buttresses are topped with conical spires. The main tower roof is a lead covered platform roof.

The interior of the New Abbey Church was modernized between 1904 and 1905 by Sir Robert Rowand Anderson and decorated again in the mid 1980’s when major restoration work to eradicate dry rot, wet rot, woodworm and stone decay was also undertaken. The late 1930’s had also been a period of works involving significant repairs to the timber roof trusses over the aisles and main roof with large metal reinforcing plates placed over the timbers that had decayed.

A major defect of the New Abbey Church when opened in 1821 was that the ministers could not be clearly heard and as early as 1822 various experiments were initiated to resolve this situation (at a cost of £11,19s and 6d paid to Mr Bonnar – one of the builders of the Church) including a large but temporary sounding board over the pulpit, hanging woollen drapery under the Bruce tower (which was an open tower to the flat roof) and preaching from temporary pulpits in various locations.  Congregations at that time numbered 1400. By September 1825 a committee had been formed to address the issue however it was not until 1835 that any action was taken when major repairs to the Abbey had to be made due to dry rot throughout the church. The pulpit had also suffered from the dry rot and was lowered by some 14” and the seats to the west end  slightly raised with both of these actions assisting in the clarity of sound. Plans were also suggested to erect walls to close off the north transept and part of the chancel area or alternatively to erect stained glass screens with heavy curtains at these points. All of this resulted in the “roofing-in” the Bruce tower with ribs, lath and plaster as it remains today.

The final expense of building the new Abbey Church of Dunfermline (by estimate) was £8300 which exceeded the original plan to spend no more than £6000 on a new Church. (The cost of the projected repair scheme of the former Abbey Church was reckoned to be £4000)