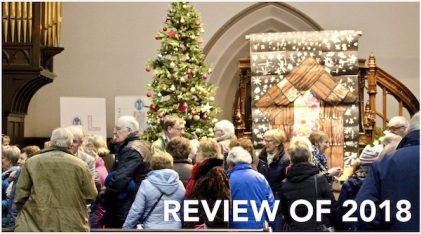 It has been another very busy year at Dunfermline Abbey. We had the celebrations marking 200 years since the laying of the new Abbey Church foundation stone which included a world premier performance of Bones, Bogles and Coronets. We celebrated the 70th Anniversary of the founding of the NHS in Fife, and marked the 100th Anniversary of the Armistice of World War I with the Cascading Poppies Exhibition and a number of special services. We survived the Beast from the East, held our Easter Palm Sunday Parade down the high street with Sydney the donkey and the AYG organised the Easter Sunday Egg Rolling, the annual Quiz night and the Old folks treat. We had a fantastic Congregational Picnic on Aberdour Beach (in the sunshine!!!)and the Abbey was a venue in thr Dunfermline Outwith Festival. We finished of the year with our usual mix of the Marines Band, Christingle and Watchnight Services and the Nativity Play.