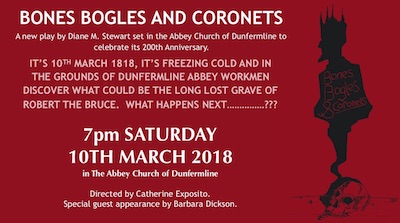 IT’S 10TH MARCH 1818, IT’S FREEZING COLD AND IN THE GROUNDS OF DUNFERMLINE ABBEY WORKMEN DISCOVER WHAT COULD BE THE LONG LOST GRAVE OF ROBERT THE BRUCE.  WHAT HAPPENS NEXT……………???