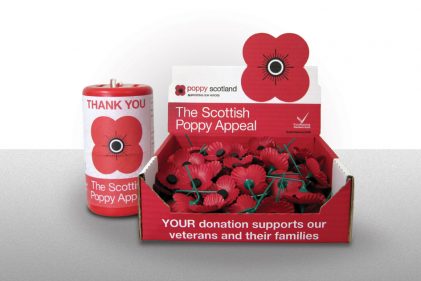 It is with a little sadness that we have to report that the PoppyScotland tins that were taking collections in the Abbey Church were stolen from the table on Monday (12th November) when the church was open for two hours. The tins had three weeks worth of collection in them. Our hope is that those who took them were in real need of the money at this time.

Following requests on Social Media a Go Fund Me Page has been set up to try and replace the funds raised which are to be given to Poppyscotland Dunfermline..

We would however not want that happening to detract from what has been a poignant and memorable marking of the Centenary of the Armistice in the Abbey Church this past week. It has been good to see so many people take the time to come and find a place within the building as they brought their own memories of loved ones lost to war, or who came home scarred by war.

Thank you to the many people who knitted, crocheted and sewed, and to those who did the pinning. Thank you also to the Dunfermline Floral Art Club, the British Legion, Sew Yarn Crafty, Christine at PoppyScotland, Dunfermline Delivers and Willie Donaldson who have supported and publicised the event.

+44 (0)1383 723005
dunfermline.abbey.church@gmail.com
Intergenerational Worship at 9.30 and traditional Morning Worship at 11am every Sunday
Midweek Prayers on Wednesdays at Noon
Copyright © 2020. All rights reserved | Scottish Charity No SC016883 | Design and Developed by Keith Rennie